UFO99 is a quirky little arcade game where you pilot a ship that you have to weave between enemies and obstacles in an arena in order to pick up items that help you score and survive. It almost feels like a mini-game that has been given just enough additional substance to make it a repeatable score-chaser. The game certainly has its charms, but ultimately UFO99 wears thin due to how limited an experience it is. 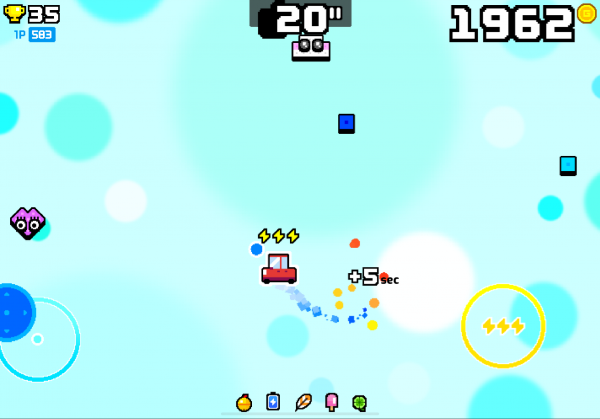 The concept behind UFO99 is quite simple: You are a defenseless ship that needs to avoid all projectiles and enemies for as long as possible. With each run starting with a 30 second timer, that sounds manageable, right? Well, presumably it is if avoidance is all you want to do, but UFO99 makes things a little more complicated for anyone wanting to rack up a high score.

As you fly around an arena filling with enemies, UFO99 also spawns a few different items that float by for you to pick up. Hammers destroy individual enemies and make coins fly out of them, clocks add 5 seconds to your round timer, bombs kill everything on screen, and a boss key interrupts your run for an untimed boss fight. Dashing around to collect all of these items is key to making UFO99 runs satisfying as an arcade experience.

To help you pick up items quickly and survive a bit better, UFO99 has a dash button that conveniently makes your craft temporarily invulnerable in addition to gaining speed. Judicious use of this dash gets important on deep runs of UFO99 as the screen can get filled with enemies that feel practically impossible to avoid without this move at your disposal.

There isn't a ton more to the game than that, but UFO99's overall aesthetic is a charming and delightful mishmash of bright, colorful, and cute animals, objects, and symbols which is just fun to look at as you play. After each round, your point total is scored by how many coins you've collected, and every 2,000 coins you gather lets you use an in-game gachapon machine to unlock new kinds of UFOs to pilot. 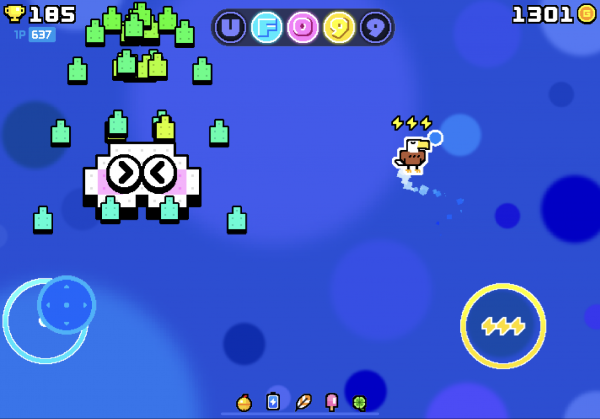 UFO99 is a free-to-play game supported by ads that you can pay to remove for a one-time purchase of $3.99. In addition to removing ads, this purchase also grants a ton of benefits, like unlimited use of items you otherwise would have to watch ads to use and a guarantee of no duplicates in the gachapon when you use it. Paying honestly feels like the only possibly enjoyable way to play UFO99, though I guess it's technically nice to be able to try the game out in its free state before you decide to throw money at it.

There's a lot to like about UFO99 in terms of its concept and style, but I just wish there was more of it and that some of what is there was handled a little better. The game has online multiplayer, for example, but it only works over a local wifi connection so you have to find and be near people you want to play with. Similarly, some of the most interesting moments in UFO99 are its boss fights, but they don't present themselves consistently and their random nature can also mean you fight the same one multiple times in a row. Even with these things being tweaked to let you play online with random players and experience a sequence of bosses, I think UFO99 is still a little light on challenge and complexity, but it would give me more reasons to keep coming back to it than it currently does.

UFO99 is a fun little game, but it feels like it's merely on the cusp of being a standout arcade title as opposed to actually being one. The aesthetics are nice and the fundamentals of the game are sound, but there's just not really enough of it to justify any kind of strong recommendation to play it.