Take the City Back from Evil Rodent Gangs in Beat Street 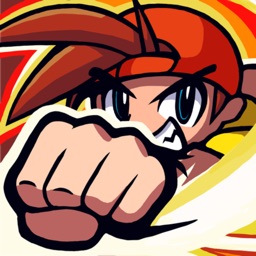 Beat Street (Free) by Lucky Kat Studios is a retro beat 'em up arcade game that plays a nice homage to games of the '90s. If you enjoyed games like Dan the Man, then you will like what Beat Street has to offer.

When I get stressed out, I usually feel like punching something, like a wall. But you know, that would end up hurting me and probably damaging property, which ends up being annoying to fix, so I take it out in video games instead. While I much prefer to relax with puzzles, sometimes I just need to tap into my destructive side, and what better way than with a beat 'em up type of game? That's why Beat Street is a fun option to have.

Visually, Beat Street is beautiful with the retro pixel art style that is reminiscent of classics from the '90s era. I have fond memories of games like Mike Tyson's Punch Out!, and this game is rather reminiscent of it for me. Despite the pixel art, Beat Street is packed with detailed environments and colorful characters that all stand out from each other. The game makes use of a bright and vibrant color palette that will hit you with a sense of better times. Animations are smooth and fluid with no issues of lag or choppiness on my iPhone 8 Plus. To top off this sentimental love letter, Beat Street has an upbeat and quirky chiptune soundtrack that wraps it all up nicely. Plus, the sound effects when you punch things in the face is downright fun.

In Beat Street, players are greeted with a map that shows the city. You take on the role of a young boy who has been given the task of cleaning up the city from the evil gangs that have been taking over. To move on to the next stage, the current one must be completed first. Up to three stars can be earned, depending on the difficulty level you choose. The goal is simple: clear out all waves of enemies on each stage using your awesome martial art skills. A boss, which is usually tougher than the rest of the goons and has a special attack, appears at the end. Everything is pretty straightforward, but the game still proves to be a fun challenge in terms of combat.

The controls are simple and clearly designed for touch screens. To move your character freely around the environment, just drag your thumb around. The game is a side-scroller, so when you reach the edge of the screen, you move on to the next sector. To do a basic attack, just tap on the screen — doing consecutive hits results in combos, which fills up your combo meter for an ultimate attack. Walking up to an enemy allows you to grab them, where you can then proceed with regular taps to perform hits while they're in your grasp. Swiping horizontally while you're grabbing them has you throw them. You can do a quick flick for a dash, but it uses combo points. Finally, you can flick upwards to do a jump kick attack, but be careful, as this one depletes your combo meter as well. You can also tap-and-hold to perform a charged attack.

Every now and then, you may find a weapon on the ground, such as a baseball bat. You can pick up an item by running over to it and tapping the screen. The item gets equipped on your hero and you can dish out more damage with it in your attacks. But keep an eye on how long you've had it — they don't last forever.

Once your combo meter is full, a button appears in the bottom left corner that lets you do an ultimate attack. This is a powerful flurry of hits that can take out most small foes and deal a hefty amount of damage to bosses, so make sure to use them at the right time. You can collect different scrolls that let you do different kinds of attacks, and collect tokens to upgrade your hero.

When you complete stages, you can get a plethora of rewards. These can include enemy figures that provide you with benefits in battle, and character tokens to upgrade, evolve, and unlock new heroes. The other characters that you can play as have their own play style and ultimate attacks, which can drastically change the gameplay. The more you play, the more variety you get.

After you clear the sixth level, you also gain access to the shop. Here, you'll find many useful items, and the offerings change every couple of hours. You'll need gold coins or green gems (premium currency) to get anything here, so save up!

Since Beat Street is a free game, there are ads every so often and an energy system. If you're low on coins and want to get something, you can watch ads to get more. It's pretty generous with the amount of coins you get, so it's not too bad. However, if you're looking for an ad-free experience, it doesn't appear to have an option for that. All of the in-app purchases are for getting more gems, which you can also exchange for coins.

A '90s inspired beat em up that is refined for mobile with one touch controls.

Beat Street is a fun little brawler for killing some time. The game's cute pixel art aesthetic brings back memories of my youth, and the chiptunes are excellent. The controls work well for touch screens and being able to play with just one hand is another bonus. The levels are challenging to play through, and the difficulty picks up at a nice, gradual pace. Even if you go back and replay levels with new moves or characters, the variety in play styles keeps things fresh and interesting. And while the game is freemium, I don't feel pushed into buying any IAPs, and the game is fairly generous with acquiring coins. There's also an online two player co-op mode that's sure to be a blast.

While there's a lot of good things going on in Beat Street, it does feel a bit repetitive after a while. You end up having to tap the screen furiously trying to get long combos, and it gets tiring. I also am not a fan of how there's no way to remove the ads in the game, because this should always be an option.

Overall, Beat Street is a fun little game that is perfect for taking out the day's frustrations in. I'm taken back to my childhood with the fantastic pixel art graphics (like other Lucky Kat games), and the music and sounds are fun to listen to as you play. The controls work out well, and being able to play with just one hand is especially nice. The levels are challenging and there is plenty of stuff to unlock to keep the game fresh and interesting.

I recommend checking out Beat Street if you're in the mood for some street brawling action. You can find Beat Street on the App Store as a universal download on the iPhone and iPad for free with in-app purchases.