Forge Your Own Epic Tale in Become a Legend: Dungeon Quest 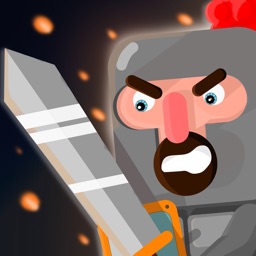 Become a Legend: Dungeon Quest ($2.99) by Pablo Martinez is a roguelike platformer dungeon crawler. If you enjoyed other games like Cat Quest, Kalimba, and Mr Future Ninja, then you may like what Become a Legend has to offer.

When I'm feeling overwhelmed by reality, my activity of choice is to just kick back and relax with video games. While I usually prefer to relax with puzzles, sometimes I have the itch to explore dungeons and collect loot. That's why I've put so many hours into games like Diablo III, but I'm always on the lookout for new ones to hit the App Store. While roguelikes aren't for everyone, I like them because they give me the challenge of besting myself in each attempt. I also grew up on platformers and love dungeon crawling RPGs, so Become a Legend intrigued me because it had everything I love in one game. What could go wrong?

Visually, Become a Legend has a minimalistic cartoony aesthetic going on, and that's quite alright with me. It gives off a cutesy, not-so-serious vibe that's always welcome in mobile games. Everything's rendered in 2D, though some parts feel like pseudo-3D (like going through doors to get to the next floor). The color palette in the game is a nice mix of dark, gloomy tones and contrasting vibrant hues, so it's easy to see what's going on. The character models for your chosen protagonist and enemies are detailed, and the textures in the dungeon environments look good.

Animations are mostly smooth and fluid, though I did experience a few jerky movements due to unresponsive controls. The game music is rather subtle, which I found odd, considering the genre. The sound effects are nicely done and rather realistic with what you'd expect from castle dungeons. Overall, the developer did a pretty good job with the game's visual and audio design.

Since Become a Legend is a roguelike, that means each run you do through the dungeon is procedurally generated. No matter how many times you try, it's very unlikely that you'll ever get the same run twice. The element of surprise is always there and keeps things fresh and interesting, which is why I like randomly generated games. The point of the game is to forge your own legend as you go through all of the dungeon floors and face off against the final boss, whatever it may be.

The controls are simple, though I'm not completely satisfied with the default settings. In the bottom left corner are two buttons that let you move left or right. In the other corner, you have several action buttons: a sword for a basic melee attack, a spell button for casting a magical attack (costs mana), an up arrow for jumping (double tap to double jump), and a down arrow for sliding through ledges.

While the controls work okay, I had issues with their positioning. I'd often find myself casting a spell rather than a regular attack, and sometimes it didn't even register my button press. The responsiveness of the controls aren't fantastic, and could definitely use more optimization. If it's just the button positioning you're worried about, though, the game has four control schemes in the options. However, I would like to see more customization with the controls, and even MFi controller support in the future.

Become a Legend is a bit more forgiving than other roguelike games. If you die, you have one opportunity to revive and make the most of the run before you die again. On the second time, that's it — your performance is tallied up and you get your score for that attempt. If you manage to find the doorway to the next floor, the game gives you the option to save and return to the menu if you want to finish it later. Or you can be brave and continue onward without a break.

Along the way, you'll find gold coins from breakable items around you, and even enemies drop some cash. The gold is what you need to upgrade skills for your hero, which you can do at the beginning of each new run. The upgrades include dishing out more damage, having more health points, stronger spells, and more. But you'll want to spend as much gold as you can, because to enter the dungeon, it costs you 100 percent of whatever gold you have left.

On top of everything, the game features daily missions that you'll want to complete to earn extra rewards. These quests include things like killing enough of specific enemies, collecting a specific amount of gold, and more. The daily missions give players a reason to keep coming back to the game and just extend the longevity.

Become a Legend: Dungeon Quest is a fun mashup of roguelike, platformer, and dungeon crawling RPG.

Become a Legend: Dungeon Quest is a fun game that will appeal to fans of the genre. The visual style is cartoonish and cute, which just adds to the overall charm. The sound effects are fun to listen to as well. The gameplay is interesting, as it's combining three genres into one, and the exploration factor is a nice addition.

While not everyone may be a fan of procedurally generated games, I think it works out well for Become a Legend. I'm always eager to find out what the next run will be like, and I love being surprised. It also makes it fair, since one can't memorize how to do a certain floor layout. The daily missions add more reason to keep coming back to the game.

While I love what Become a Legend offers, I am not too happy with the control schemes. Yes, there are four different layouts to choose from, but I'm having issues with all of them. Specifically, the button positions feel a bit off to me on my iPhone 8 Plus, and it's not as responsive as I'd like it to be. Hopefully the developers can add MFi controller support in the future, as well as let players customize the button positioning, or just optimize it better in an update.

I was excited for the release of Become a Legend: Dungeon Quest, and while the game itself is fun, I feel like the overall experience is a bit marred from the controls. As much as I like the delightful graphics, gameplay, and replay value, it gets frustrating when the controls don't respond to my touch or I end up tapping the wrong button too often. Hopefully these issues get fixed sooner rather than later.

Become a Legend: Dungeon Quest is available on the App Store as a universal download for your iPhone and iPad for $2.99. There are in-app purchases for potions and gold.