The prospect of playing a free-roaming biking game that's focused on speed, precision, and stunts sounds like one of the worst matches for touch screen controls that I can imagine. This is precisely what Descenders is, and--unsurpsisingly--the controls are kind of troublesome. What is surprsing though is that my near constant fight to control the game's chaos has turned out to be a big reason why I keep coming back to it. There's something about the wild speed and structure of Descenders that makes it hard to put down, even in arguably its worst form factor.

Descenders is a game about downhill biking. You control a cyclist and try to steer them effectively through various environments, some of which have carved dirt tracks and ramps, where others have no track at all. Your ultimate goal for each run is the same (make it to the finish), but you also receive a randomized sub-objective on each track that might ask you to perform specific stunts, finish the run in a certain amount of time, or complete the track without braking, among others.

Each track in Descenders only takes about a minute or so to complete, but they are connected in a web of tracks that you are supposed to move between before completing a "boss" track that lets you advance to a new region with tougher terrain and challenges. Your biker has a limited amount of health that you lose any time you wreck or wipe out, so a big part of Descenders is trying to balance your own survival with the speed and challenge of completing tracks and their objectives.

If this sounds a little bit like a roguelike, that's because it totally is. Descenders takes a well explored structure from more combat focused roguelikes like FTL or Slay the Spire and just drops it into a game more like SSX or Tony Hawk's Pro Skater. It's kind of genius, and works surprisingly well. Tracks are appropriately tough and tempt you into taking risks to earn things like crew members who can grant you new abilities and bonuses like better bike stability, higher jumping, etc. On top of that, tracks are procedurally generated but feature a lot of variety, including special challenges like first-person races, sponsor opportunities, and more.

Outside of this primary mode, Descenders also has a Free Ride Mode, different bike parks you can tool around in or compete for leaderboard ranks on, or even play multiplayer (though it kind of seems DOA. No players on release every time I've checked since). If you are playing tracks that other players online are currently riding, they may also pop into the environment, no matter which mode you are playing. 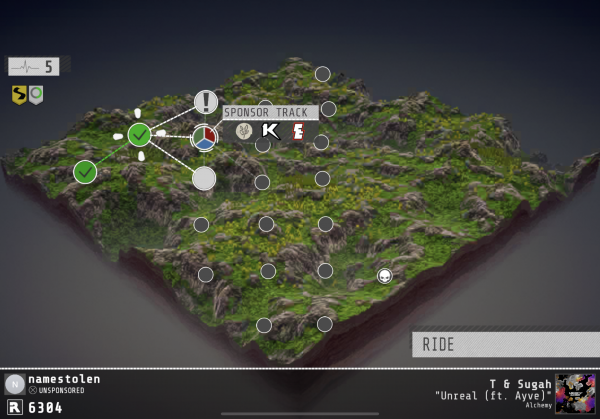 The action in Descenders can be harsh, fast, and unforgiving, but the whole thing works in large part because of how much granular control you have over your cyclist. In addition to basic steering controls, a second directional input allows you to flick in directions to jump, skid, or even wheelie your way around tracks. Essentially, you are given both control of your bicycle and the weight distribution of your character riding it, both of which you need to pilot effectively to make it through even some of the most basic challenges in Descenders.

The elephant in the room regarding these controls is obviously how they work using a touch screen device. In short, they definitely aren't great, particularly if you don't regularly play action games via touch. Even if you are comfortable with touch controls, there are times where you can lose track of how your thumb is dragging a virtual stick that can lead to accidental skids or trying to perform stunts unintentionally. These issues can and will be the reason for ending some runs sometimes. But, probably because it's easy to just hop back in and keep playing, I'm not bothered by them too much (though only if playing on a larger screen like an iPad). If this sounds like a deal-breaker, also just know that Descenders has full and perfect bluetooth controller support that sidesteps all control issues I just named.

Despite seeming like it shouldn't work on mobile devices, Descenders offers up such a fresh take on action sports games that it almost doesn't even matter. I can't say the App Store version is the best way to play it, but if it's the only way you'll end up spending time with this game, then it's well worth picking up.