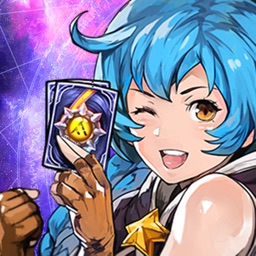 Athenion might not have the pedigree of some other deck-building card games available for mobile, but that shouldn't put you off. This is a game that's packed full of bright ideas, fresh new gameplay modes and enough content that you can lose hours of your life to.

Battles take place on a 4x4 grid, and see you taking it in turns with your opponent to lay down cards. You draw up to five cards from your deck of forty at the start of every turn.

These are the units you're playing in the fight, and they range from hulking monsters to flighty fairies, from magical trees to fearsome undead dragons.

Your cards have arrows on them that you show you which direction they can attack. You'll also notice a bunch of other numbers on the cards. These let you know the hit points a card has, how powerful its attack is and how many soul points it grants you.

Those soul points let you attack your opponent and they're the key to victory. The first player to lose all of their own hit points is the loser.

There's a lot more going on than that though. For one thing you need to pick from one of six different factions before you even get to the fights.

These factions have different strengths and weaknesses and figuring out which of them best suits the way you want to play is the first step of a pretty long journey.

Different factions have different special moves as well. Some let you link together cards to make them more powerful, others are all about sacrificing weaker units to create pockets of dark magical energy. One lets you build giant rock walls that you can use to protect some of your units or power up others.

There are single-player challenges, regular events and much, much more as well. You're never short of something to do in Athenion, and the pace of the matches lets you get a lot of them in in a single setting.

There's a staggering amount of depth to Athenion. It's going to take you a good while to get to grips with the basics and once you've done that there are layers and layers to peel back. Every time you win you'll figure out a new strategy and every time you lose you'll be trying to find a way to right that wrong.

The game looks amazing too. The cards all sport a brilliant anime art-style and you'll want to collect all of them just so you can check them out. The speed of the fights is a massive plus too - they deliver huge chunks of tactical action in the sort of short-blast sessions that are perfect for mobile play.

On top of that there's a brilliant community to the game, and you never have to wait long to find an online battle. There are a number of different modes that let you practice with different decks, take part in intriguing events and fight it out in ranked and casual multiplayer matches.

There's a pretty steep learning curve here, so if you're not in for the long haul then you might be better finding your card-based fun somewhere else. Even when you've got the basics down you've still got a lot to learn and it can be punishing to come up against an opponent who knows more than you do.

There are also a lot of currencies, crafting materials and other rewards to figure out. The game does tell you what they do, but the tutorials are pretty brief and you're left on your own for a lot of the time to try and get to the bottom of things.

Athenion might not be the easiest game to understand, but once things start clicking it becomes something really rather special. There are some brilliant ideas here and they're woven into a bright tapestry of gorgeous visuals and wonderfully paced mobile play.

It won't be to everyone's taste, and it's fair to say that some players are going to put it down before they've even got to the good bits, but this is one CCG that it's well worth sticking with.