The influence of FTL is still holding strong as evidenced by games like Abandon Ship. This game takes all of the roguelike elements of ship and crew management from Subset Games's breakout hit and moves them from the stars to the high seas. There are other ways in which Abandon Ship tries to establish its own identity but most of them aren't very well implemented making for an experience that constantly reminds you of an older, better game you could be playing instead. 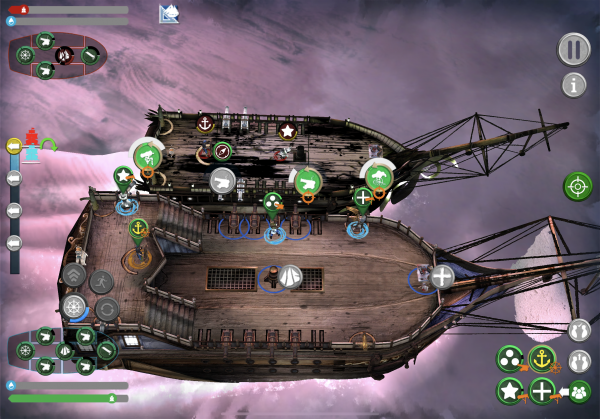 In Abandon Ship, you play as a sea captain on the run from a group of seafaring cultists. You start with a crew of a handful of prisoners you freed in your escape and a very basic ship, with your ultimate goal being to stay ahead of your pursuers. Along the way, you sail in open waters, have sea skirmishes with pirates, and can stop off at ports to upgrade your ship, hire new crew, etc.

Along the way, it's also clear that these cultists are more than just fanatical worshippers. The world of Abandon Ship has some occult and monstrous secrets lying in wait, which mostly borrow from the realm of Lovecraftian horror and its derivatives.

For the most part, anyone familiar with FTL and the games that have already imitated it will be pretty familiar with how Abandon Ship works. You sail to a location on your map, and while there something or some things happen that you need to react to in order to move on. Abandon Ship is a little different than other titles like this in that each point of interest is like a small open world map that you sail through in real-time. This is to say you might see an event that seems like a battle and decide to take that on first before hitting the port to repair, though you have to weigh these options against the time it takes to explore the map and the ticking timer of when the cultists might arrive to try and recapture you.

All of this works... ok, but none of it looks or feels particularly great. The polygonal visuals are all pretty rough, as are the parchment-textured dialogue boxes and overlay UI elements that highlight events, units, etc. None of it feels super cohesive and functionally certain things like sailing around the map or scrolling through menus don't quite work the way you want them to. Because of the real-time nature of the game, this can create some problems, though Abandon Ship does handily provide a pause button that you can use at virtually any time to queue up commands or just assess your current status. 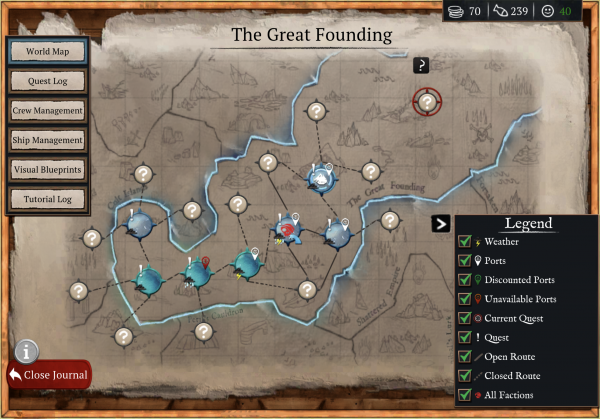 If you're curious about Abandon Ship, the game is a free-to-start title, giving players about 15 minutes of time with it before offering a few different options to pay and unlock several different campaigns and modes. Despite its brevity, this demo does give a good window into the way it looks, feels, and controls, and your comfort with those things are primarily what will affect your overall enjoyment of it. The stories from the campaigns and the level of randomized events are all serviceable with their main hook being their repeatability and your ability to strategize around completing them, and there is plenty to do even if you only pay into the main campaign unlock and not the others.

I enjoy the time I spend with Abandon Ship, but I can also never shake the feeling that I could be playing any number of games of the same mold that find more elegant and appealing ways to offer this kind of survival/combat/management/roguelike experience. Since all of these games are built around replayability, it's also hard to think of these older games as something that have been exhausted and can't be returned to. So, unless the high seas backdrop or Lovecraftian aspects of Abandon Ship speak to you in particular, I'm not sure there's a whole lot else this game offers that's better than what can be found elsewhere.

Despite some rough edges, Abandon Ship is a perfectly serviceable roguelike in the vein of FTL. The only problem with this is it's not different enough from other classics in this genre, and what it does do isn't quite up at the level of games that came before. This makes it a decent pickup if you really just need a new-looking kind of this game or cultist and pirate aethetics really speak to you personally. Luckily, if you're not sure, the opening demo version of the game is rather informative of what you can expect from the full game.